As children we play pretend princess, sending younger siblings to serve us juice and crackers, fanning us as we sit on a throne of pillows and blankets in our make believe castles.  Twirling in our dresses, making the neighbor kids into our subjects, and ruling our empires of the backyard with delight and imagination. It quickly dissolves once one kid questions our authority, but for a moment, we get the taste of the power and the throne.

The idea of a throne, ruling, and reigning is entrenched into our DNA.  We are born with a desire for power or control, but also with the need for worship, the need to be lead by someone or something.

We often question how people get themselves into bad relationships, pyramid schemes, a terrible job or even cults.  It’s because, unchecked, we are looking for something to lead us somewhere. We are looking for someone to tell us who we are and where we belong.It’s in us.  And maybe not everyone gets sucked into a cult, but it could be way less extreme than that.

There is a throne of our heart, and we are constantly trying out all kinds of things to put in that place. There is a place of control, reign, ideals, values, that drives us to act and live out as we do.

And this isn’t surprising, humanity has been this way for a long time. Throughout the old testament, you see the rejection of God as the true ruler, King over their hearts.

After God led his people out of Egypt, slavery and through the wilderness.  He gave them the promised land. But they weren’t happy, the strayed away, they followed after other gods.  He provided them Judges and Priests to try to bring them back, but when the Judges and Priests either died or didn’t follow after God.  They cried for a King, like all the other nations. They were warned what an earthly king would do.

But the thing displeased Samuel when they said, “Give us a king to judge us.” And Samuel prayed to the LORD. And the LORD said to Samuel, “Obey the voice of the people in all that they say to you, for they have not rejected you, but they have rejected me from being king over them. According to all the deeds that they have done, from the day I brought them up out of Egypt even to this day, forsaking me and serving other gods, so they are also doing to you. Now then, obey their voice; only you shall solemnly warn them and show them the ways of the king who shall reign over them.” -1 Samuel 8:6–9

Friends, let’s be honest.  We aren’t more evolved or better than those in the Old Testament world.  We are quick to run from idol to idol. We can even church those idols up and lie to ourselves that they really aren’t idols or all that bad.  We may not have altars with foreign bronze or gold statues in our houses.  We don’t go to a temple and offer burnt sacrifices.

But we lay ourselves out on the altar of social media presence and notoriety.  We put up white fences and shiplap. We sacrifice time for financial security, entertainment and independence.  We step up onto the throne worshiping self-empowerment and heroism. When set up our lives to celebrate things and experiences like festivals and feasting driving us to live for the present moment more than anything else.  We chase after relationships and false loves, giving our hearts to things that will crumble under the pressure of the crown.

We reject God’s authority when it gets too uncomfortable, or means that we are vulnerable to lose everything we worked hard to attain.  We reject God’s reign of our lives when it means having a hard conversation. We reject God as King when get that ring on our finger, worshipping the gift instead of the giver.

Friends, may I even plead that we struggle with God as king, because it literally means that we are more lost than we thought.  We are more helpless and inadequate than we want to admit. No one wants to feel weak. And when God rules and reigns in our life as the true King, we have to face the facts.  We are in desperate need.

But it really is good news. 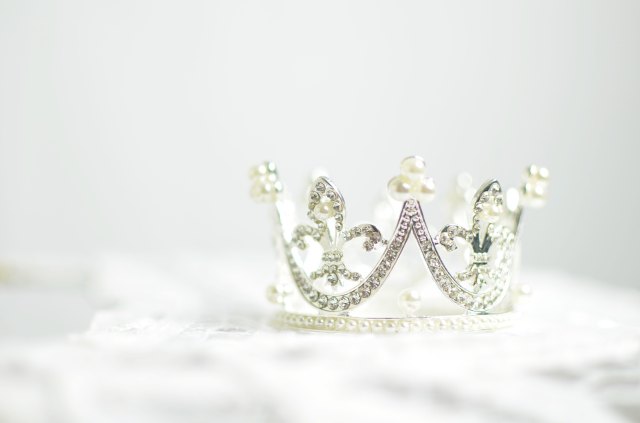 I need to hear that it’s not up to me.  The crown is too heavy. The pressure is too much. I can barely handle keeping my kitchen clean, let alone being sovereign over my days.

In our current day, so many more people are struggling with anxiety, depression, unhappiness, than statistics will ever show.  We can’t keep up. But we don’t have to. No, our Father in heaven, sent Jesus as the true and better King, to establish his reign and rule here on earth as it is in heaven.

“For to us a child is born, to us a son is given; and the government shall be upon his shoulder, and his name shall be called Wonderful Counselor, Mighty God, Everlasting Father, Prince of Peace.  Of the increase of his government and of peace there will be no end, on the throne of David and over his kingdom, to establish it and to uphold it with justice and with righteousness from this time forth and forevermore. The zeal of the LORD of hosts will do this.”  -Isaiah 9:6–7

It’s on his shoulder and he will uphold it.  We don’t have to.  We can live in peace and rest because He is on the throne.  He came, bore a crown of thorns, not just to sit on a golden throne here on earth, the throne of our hearts forever.

Photo by William Krause on Unsplash

Photo by Ashton Mullins on Unsplash