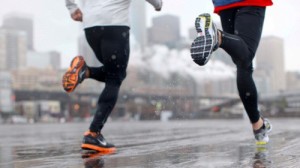 Yesterday, I went out for an 8 mile run at 10:30 in the morning. It was pretty cloudy and cold, just the way I like it for running outside. I looked at the weather and saw that we were expecting rain, but I thought I would have enough time before it started.

I was wrong. Just as I was going into my last mile it started to sprinkle and soon it was raining pretty hard. Instead of stopping and find a place to wait it out. I kept going. Invigorated by this surreal moment, I smiled and kept going.

That was my favorite run so far in my training….

I describe myself as many things, teacher, artist, sister, friend, coffeelover, booknerd, tv addict, but never have I used the term runner to describe myself.

So when someone suggests that people can’t change, I tell them my story about what I once was and what I am now.

I am now a runner.

What are you? What do you want to become? Is there something you think you will never be? What do you see as impossible in your life?

2 thoughts on “I think I have become a runner….”