I have to admit…..that I, movie critic extraordinaire….um….(this is really hard)….went to the midnight showing of Eclipse. (I have already repented and regret this decision to attend this movie.) I was also the one to giggle at the parts that aren’t supposed to be funny. It was so incredibly cheesy. It was an interesting observation of the Twiculture! I should write a whole post about my thoughts about the whole Twilight phenomenon, but I don’t want to offend those that like it.

Erin, her friend Tori and I got in line with all the teenage girls in the suburbs (plus their moms) about 8pm with our Chipotle and cards. It was an interesting evening! Not too many bug bites and a lot of laughter! 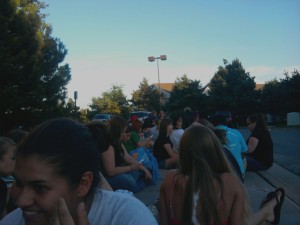 The line was really long…I think it wrapped all the way around the building! Sort of crazy that all these people really wanted to see this movie the day it came out! 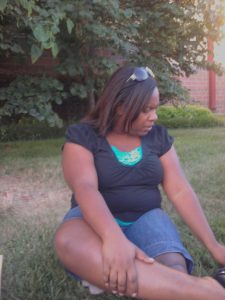 Erin, I don’t think she realized I took a picture of her! Hehe! 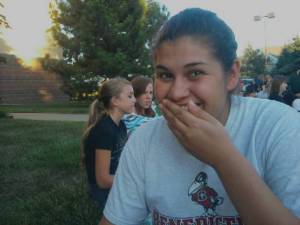 Erin’s friend Tori….she was eating Chipotle…but it looks like she is trying to hide a giggle… probably because the little girls behind us were hilarious to listen to… they were 14 and seriously boy crazy!!